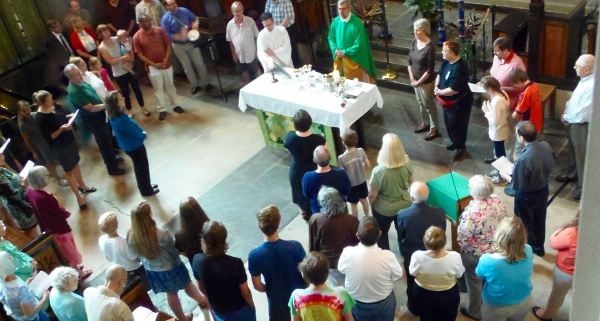 John of Patmos foretold peoples of all nations streaming to the City of God. In worship, time and eternity are joined in the eternal now. Saints of every time and place crowd in among us. Seems like a great opportunity to ask one of them about Jesus’ sermon on the plain.

In life, she stood five feet tall and couldn’t read or write. Yet she led 70 slaves to freedom without losing a single one. During the Civil War she served as Union scout, spy, and nurse. She is also the first woman to lead a U.S. military operation in what is known as the Combahee Ferry Raid. She guided Union boats through mine-filled waters and successfully rescued more than 700 slaves from nearby plantations, while dodging bullets and artillery shells of slave owners and Confederate soldiers.

Harriet Tubman was born a slave in Dorchester County, Maryland in 1822. At 27, she fled on foot and alone 90-miles north to Pennsylvania.  Later she recounted, “When I found I had crossed that line, I looked at my hands to see if I was the same person. There was such a glory over everything. The Sun came like gold through the trees and over the fields, and I felt like I was in heaven.”

Tubman escaped from hell then returned to it. She returned to slave territory between 13 – 19 times. She risked her life each time. Her astonishing success at using and expanding the secret network, known as the Underground Railroad, led the abolitionist, William Lloyd Garrison, to call her “Moses of her people.”

Tubman credited her success with an ability to take instructions directly from God.  Harriet had fainting spells and visions throughout her life stemming from a brain injury when she was 13.  Stories differ. By one account, a slave master threw a metal weight at someone else, that fractured her skull. She spent upwards of two months in a coma without medical treatment. Harriet’s documented uncanny ability to avoid capture despite the determined efforts of slave owners and armed slave hunters, she later said, was due to the fact that the old injury had made God’s voice easier for her to hear.

After the war, Tubman was recognized as a war hero, but she wasn’t paid. She petitioned the government but was repeatedly denied compensation because she was a woman. She supported herself by selling homemade pies, gingerbread and root beer. Despite meager resources, she opened her home in Auburn, NY to orphans, the elderly, and freed slaves looking for help.  On March 10, 1913, she died of pneumonia, surrounded by family and friends. A devout Christian until the end, her final words were, “I go to prepare a place for you.”

If her courage and achievements weren’t testament enough, these last words attest to her dedication to others, seeking no glory or fame. A woman who became an American icon by hiding in shadows. A woman who escaped the hell of being a slave and set about helping others to do the same.

I imagine, if we asked Harriet, she would point out Jesus stood on a level place as he preached. Here Jesus, the Son of God, walks among humankind as an equal.  Here Jesus taught there is no place for me to stand that is any higher or lower with respect to God than you.  Whether we walk up the steps to the altar or gather in an open field, God is with us.  Every human life is precious.  God doesn’t want people to own people.

I imagine Harriet might say this is what Jesus aimed to show us when he took on flesh and lived among us (John 1:14) Christ Jesus, “Who, though he was in the form of God did not regard equality with God as something to be exploited, but emptied himself taking the form of a slave, being born in human likeness. And being found in human form, he humbled himself and became obedient to the point of death—even death on a cross” (Philippians 2:6-8). Jesus stands with the suffering, the afflicted, the no-account, the invisible poor who make our shoes. To follow Jesus is to walk the way of his cross. Jesus made himself subject to human capriciousness and malice in solidarity with those who become its targets.  Let the heavenly chorus sing for joy.

Harriet would not fail to notice all the “blessings” mentioned in Jesus’ sermon are what most people would call woes; and all the woes are what we usually count as blessings.  Jesus preached woe to the wealthy, and those who have plenty to eat, who are laughing now and possess the esteem of others who all speak well of them.  Aren’t these the very things we often pray for?  As for hunger, weeping, and the hatred of others who exclude, revile, defame us on account of Jesus—who among us would call these blessings?  Well, apparently, Jesus did and does.

But, as Harriet would be quick to say, this is not because Jesus wants us to weep more, or to become poorer, or to be hated. This does not please to God.  Rather, Jesus the great revealer, shows us the fullness of God dwells now in the abandoned places of human despair. God is with you in your struggles.  God is there when you’re not being very good at being religious, let alone spiritual.  God is present in distress, tragedy, and injustice –not because God wants more of these things—but because God intends to put an end to such things.  In fact, God has already turned the tide. (Nadia Bolz-Weber) Christ Jesus has called us to come stand beside him in this fight.

Jesus goes on to up the ante saying, ‘Love your enemies. Bless those who curse you, pray for those who abuse you. If anyone strikes you on the cheek, look them in the eye and offer the other cheek also. If anyone takes your coat offer them your shirt.  Give to everyone who begs from you. If anyone steals your stuff, don’t ask for it back. Do unto others as you would have them do to you.’ (Luke 6:27-31)

Theologians will say these Beatitudes are descriptive of God’s kingdom, not prescriptive of what we need to try and be more of.  Regular people say, ‘Sure Jesus, in an ideal world, I might be willing to do all these things—but in case you haven’t noticed—this not an ideal world!’  That’s when our strong faithful new friend Harriet might gently pull on our elbow. Jesus knows the power of evil is real. But there’s no way to begin making a better world unless evil is returned with forgiveness and mercy. Let all the Saints sing alleluia!

I go to prepare a place for you.  There’s a reserved seat for you right beside Harriet at the great banquet Jesus has laid out for us. Come, share in the inheritance of all the saints. Come to the table prepared for you.