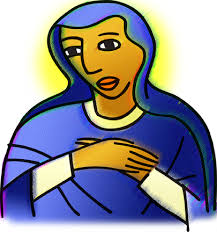 Mary, Mother of our Lord

“Mary set out and went with haste to a Judean town in the hill country, where she entered the house of Zechariah and greeted Elizabeth (Luke 1.39-40). A newly pregnant teenager makes for the hills. She doesn’t slow down until she reaches the home of her also-pregnant cousin.  She flees toward her kinswoman, toward refuge. She finds solidarity and sanctuary.

‘On a well-swept doorstep, two women meet to share the ancient, womanly experience of being with child. Mary and Elizabeth are two ordinary, pregnant women in the most extraordinary time and circumstances, on the brink of greatness, but first attending to their relationship with each other and with God. Motherhood is daunting for every woman, especially the first time, and these two women found themselves pregnant under most unusual and unexpected terms: one past the age to conceive, and the other unmarried. So, like women in every place and time, they spend time together, keeping each other company, learning and praying and perhaps laughing together, as they faced first-time childbirth and motherhood’ (Kate Huey, Weekly Seeds).

In his book, The Road to Daybreak: A Spiritual Journey, Henri Nouwen asks what must have gone through Mary’s mind?  “Who could ever understand? Who could ever believe it? Who could ever let it happen? The Angel’s proposed plan was preposterous and dangerous, but Mary said “yes!”  When her kinswoman welcomes her, she bursts into song — a song so subversive, governments twenty centuries later will ban its public recitation. According to scripture, Mary stayed with Elizabeth for three months, or until John after was born. Then returned home to an uncertain future with Joseph in Nazareth (Luke 1: 56).

John the Baptist proclaimed of Jesus, “His winnowing-fork is in his hand, to clear his threshing-floor and to gather the wheat into his granary; but the chaff he will burn with unquenchable fire” (Luke 3:17). We must pause a moment to acknowledge the tragic and painful ways the beautiful story of Mary has been weaponized by the church against women. When the history of all the words said of Mary is laid before Jesus, a whole lot of unquenchable fire will be required to burn away the layers of misogyny and theological malpractice heaped upon Mary to obscure, nullify, and outright contradict her story.  How many women throughout history and across cultures have been bludgeoned with the cudgel of religious shame into self-loathing for failing to live up to the impossible standard of being both a virgin and a mother at the same time?

Yet, the self-righteous, the self-interested, the liars, bullies and Christmas marketing people could not steal the gospel from us. For them, Mary’s message contains surprises that will not be quiet. Mary’s spirit rejoices, not because Joseph bought her the perfect Christmas gift— but because “…[God] has filled the hungry with good things and sent the rich away empty” (Luke 1:52b)  Mary’s song is essentially about social justice.

New Testament scholar Scott McKnight points out that in the 1980s, the government of Guatemala banned singing of Mary’s Magnificat for Christmas because, unlike Away in a Manger, this song was considered subversive and politically dangerous. “Authorities worried that it might incite the oppressed people to riot.” (Kate Huey, Weekly Seeds)

The Magnificat was excluded from evening prayer in churches run by the British East India Company in colonial India. Years later, on the final day of imperial rule in India, Mahatma Gandhi requested Mary’s song be read everywhere the British flag was being lowered. The junta in Argentina forbade the singing of Mary’s song after the Mothers of the Disappeared displayed its words on placards in the capital plaza. And during the 1980s, the governments of Guatemala and El Salvador prohibited any public recitation of the song.

What made Mary’s song so dangerous?  Mary’s song of joy and faith is anthem of solidarity with the poor. “He has brought down the powerful from their thrones and lifted up the lowly” (Luke 1:52a).  Mary and Elizabeth, like people of faith of every generation, expanded the powerful bond of their kinship with one another for belonging in the ever-widening circle of the kin-dom of God.  They shifted their allegiances and loyalties.  They went from living in an “us versus them” world, to a world of love, mercy, forgiveness, and grace for all.  That is why we celebrate Mary (and Elizabeth) today.  They are heroes of faith who show us the way to walk toward transformation and renewal by the way of the cross.

Mary and Elizabeth afforded one another safety and strength through the gift of sanctuary.  Can we, like them, grow in our stated mission, striving to be a living sanctuary of hope and grace?  This month, our church, at its national Churchwide Assembly, voted to become a sanctuary denomination.  By this, the ELCA has publicly declared that walking alongside immigrants and refugees is a matter of faith. They affirmed that we are called to use our hands and voices in obedience to Jesus’ command to welcome the most vulnerable.  Specifically, the Churchwide Assembly’s resolution challenges us to seek for ways that we may provide concrete resources to respond to the needs of our human family who are suffering now—especially immigrants and asylum seekers.  This national resolution has drawn criticism for being too radical. Yet, in substance, how is it any different than Mary’s song? Mary’s song is a lullaby conjuring dreams of new worlds as we sleep.

This week, August 23-25, our nation commemorates the 400th anniversary of the trans-Atlantic slave trade.  Most of us learned about the arrival of 102 passengers on the Mayflower in 1620. What you didn’t learn in history class was that a year earlier, August of 1619, 20 enslaved Africans from the Kingdom of Ndongo in Angola landed at Point Comfort (now in Virginia) on the White Lion, a 160-ton English privateer slave ship.  The transatlantic slave trade was the biggest forced migration of people in world history.

The Mother of Exiles, the Statue of Liberty has a broken shackle and chain laying at her feet as she walks forward, to commemorate the national abolition of slavery in 1865.  Could Mary’s song of solidarity be the cure that alludes us? Can we finally stand with the children of those who never knew welcome to our shores, as members of one wonderfully diverse human family? In 1992, Toni Morrison told the Guardian newspaper: “In this country, American means white. Everybody else has to hyphenate.” When can our allegiances and loyalties shift? When will our national story expand to become part of the universal story—of the ever-widening circle of the kin-dom of God? Listening to Mary’s song will end the fever of racism animating the irrational, tragic, and self-defeating anger against people of color and immigrants today.

In a world that longs for a gentle peace, a generous sharing of the goods of the earth, a time of quiet joy and healing, Mary points the way to becoming expectant with hope and filled to the brim with joy. See, even now we are being filled with joy and delight in God’s grace so that the song of our lives may give praise to God and our souls magnify God’s grace.

Crooked Made Straight
Scroll to top