Pastor Monte (gender pronouns: he/him/his- what’s this?) was called to Immanuel in June 2003.  He enjoys serving a diverse urban community and a congregation with such a long history of welcoming friends and neighbors—especially children and youth.  In addition, Immanuel’s commitment to beautiful music and liturgy makes him feel spoiled to preside at worship each week.

Pastor Monte earned his master’s degrees in 1993 from the University of Chicago, Divinity School and The School of Social Work Administration.  His ‘Lutheran year,’ including Clinical Pastoral Education, field work, and full-year internship were administered through the Lutheran School of Theology in Chicago. He obtained a B.A. from St. Olaf College in 1985.  Immanuel is the third Metro Chicago congregation he has served in since being ordained in 1993.

Pastor Monte was remarried in 2004.  He currently lives in Evanston with his wife, Kari, their 14-year old daughter, Leah, and 15-year old dog, Maddy.  In addition, three college-aged boys—Russell, Joe, and Sam are eagerly welcomed home at every opportunity. In his free time, Pastor Monte enjoys working in his yard, riding his bike, reading books and going to plays. 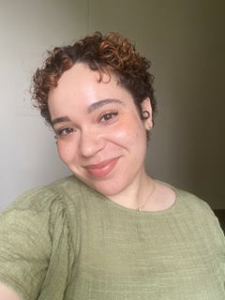 (Pronounced A-driana, or Dri for short [rhymes with tree])

Hi, friends! My name is Adriana (but you can call me Dri) and I am so excited to come on board as the ECT Youth and Household’s Minister. I was born and raised in Northwest Indiana, where I also taught 7th grade ELA for 5 years in addition to youth ministry and Christian education leadership at my local church. I coached volleyball and led Fellowship of Christian Athletes huddles during my teaching years.

I’m currently working on a PhD in Christian Education and Congregational Studies at Garrett Evangelical-Theological Seminary in Evanston, IL. I look forward to facilitating a fun and safe space for faith formation where we can ask tough questions and co-create new ways of being the Beloved Community.

PS– I love all things anime, BTS, and Disney!

Public Transportation: We are conveniently located about two blocks from the #22 Clark bus and a ten-minute walk from the Thorndale red line station.

Parking: On Sundays, parking is available at Senn High School (5900 N Glenwood Ave) half a block south of the church. An accessible drop-off location is located directly in front of the church entrance on Elmdale Ave.