Cantor Brad Whaley (gender pronouns: he/him/his- what’s this?) is a liturgical musician who recognizes and values the voices of God’s people in the assembly.  He oversees the liturgical life of the parish through the planning of worship and music and provides leadership for the Immanuel Choir. A champion for robust congregational song, Brad invites God’s people to join in singing through a variety of means, including the use of creative organ improvisations rooted in the Lutheran tradition.  He has conducted several major sacred works including Handel’s Messiah, performed in its entirety, John Rutter’s Requiem, J.S. Bach’s cantata Ein feste Burg ist unser Gott (BWV 80), Vivaldi’s Gloria, and Heinrich Schütz’s miniature oratorio The Seven Words from the Cross, among others.  As a recitalist, Brad has appeared across the Chicago metro area, most recently as a guest artist at Loyola University Chicago’s Madonna della Strada Chapel.

Brad serves as the Music Director and Vocal Coach for the Edge of the Wood Theatre School for Young Actors in Chicago.  Additionally, Mr. Whaley is a classically trained baritone, having had extensive performance experience on the operatic and concert stage, both nationally and regionally.  He has appeared with the Grant Park Chorus, William Ferris Chorale, St. Luke Bach Choir, and the Elgin Master Chorale.  He holds a Bachelor of Music degree from East Carolina University (Greenville, NC) and a Master of Music degree from North Park University (Chicago, IL.)  Brad is a member of the Association of Lutheran Church Musicians and the Chicago Chapter of the American Guild of Organists. Previously, he has served Epiphany Lutheran Church (Elmhurst), Trinity Lutheran Church (Des Plaines), and Grace Lutheran Church (Villa Park). Contact Cantor Brad at 773-743-1820 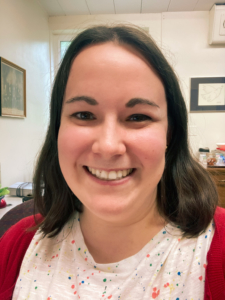 Julia Steiner (gender pronouns: she/her/hers- what’s this?)hails from the northern wilderness of Milwaukee, Wisconsin. She has degrees in vocal performance and political science from Lawrence University and a Master’s in voice from the San Francisco Conservatory of Music. For the past five years, she has served as the soprano section leader in Immanuel’s choir and remains unable to resist a good hymn descant.

Julia has previously served as an administrator for small businesses and nonprofits around Chicago, most recently as a bookseller at an independent bookstore on the North Side. She still maintains an elaborate spreadsheet of all the books she reads each year and enjoys seeing as many movies and live productions around the city as possible with her partner.

Our Parish Nurse, Marcia Smith (gender pronouns: she/her/hers-what’s this?) is trained in Faith Community Nursing, which is a specialty practice of professional nursing.

Marcia has been a member at Immanuel for twenty-some years and a registered nurse for 40. She became the Parish Nurse in 2017. She started out life as a suburbanite but now loves living in the city. Marcia’s favorite activities include reading, birdwatching and botanizing. She is an avid environmentalist and can be seen biking around the neighborhood.

Public Transportation: We are conveniently located about two blocks from the #22 Clark bus and a ten-minute walk from the Thorndale red line station.

Parking: On Sundays, parking is available at Senn High School (5900 N Glenwood Ave) half a block south of the church. An accessible drop-off location is located directly in front of the church entrance on Elmdale Ave.